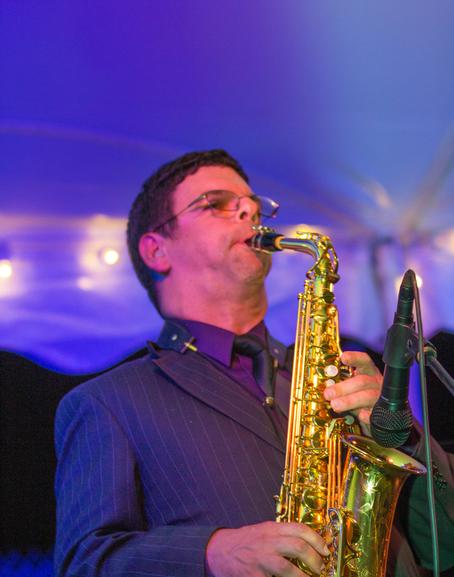 Musical from an early age – he sang before he talked – John Libera has performed in 17 states, Washington DC and Canada before tens of thousands of people. In high school he was in the band, as well as a drum and bugle corps, then studied music at Holyoke Community College and Berkshire Hills Music Academy (BHMA) in South Hadley, Massachusetts. An accomplished woodwind player, he is equally at home with the classical clarinet and saxophone repertoire as with jazz standards and pop music. On back-up vocals, percussion and keyboard to accompany band mates, he shows his versatility.

John maintains an active schedule touring with the BHMA Performance Troupe and in small ensembles, appearing at conferences, schools, colleges, and private events. His career highlights include performing at notable venues such as House of Blues in Boston, Tanglewood Visitors Center, PepsiCo Corporate Headquarters, Union Station in Washington DC, and Jazz at Lincoln Center.

In his stint with The Kandoo Band, a group of talented Berkshire Hills alumni with Williams syndrome, John helped bring recognition to the achievements of individuals with intellectual disabilities. The Kandoo Band, which has several songs available through iTunes, appeared at Indiana University as winners of the first Best Buddies International Talent Competition. Other honors for John include the Junior Award for the Handicapped of the National Federation of Music Clubs (twice) and the Gilles Hebert Music Prize of Valley Community Arts.

For information on how to book John to play at your event, contact him at info@johnliberamusic.com, or go to the Contact section of this website, or visit berkshirehills.org/hire-performers.